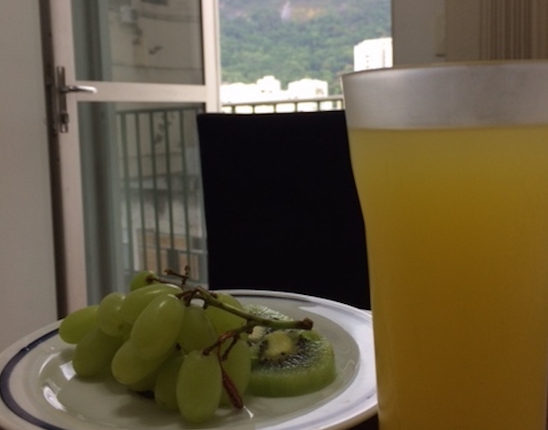 Eating Kiwis in the rain

Sitting here listening to the sound of rain in Botafogo, both boys sleeping, I can’t quite believe we’ve arrived! Rio is more beautiful than I could have imagined, as cheesy as that sounds… but driving towards our air bnb from the airport, seeing the colourful architecture along the way and the eclectic mix of people, I knew I would enjoy being here for the time we have planned. Aiden was in awe when we drove through tunnels in the mountain to get to our destination. He’s been a real trooper as we had to endure a connecting flight in Luanda and his sleep routine was disturbed. He slept on the plane to Rio for more than 7 hours though which literally saved our lives as we managed to get some sleep, although broken. Anyone traveling with small kids will know the struggle, however the only positive thing about flying with children is that you get to skip the queues….it started with the first queue in the Luandan airport when a kind gentleman saw Aiden sleeping on Peters shoulder. He didn’t speak English but instructed us to walk to the front of the queue as we had a small child. We shyly went up to the front fully expecting to be turned away, but it seems that we could literally go straight through. Our luck continued throughout our travels here and we arrived safely in Rio in the am.

We have already ventured out bravely to the local grocer to get supplies and naturally got lost as one does in a foreign place. We did have clear instructions and checked a map, so I blame Peter for getting it wrong J It’s all part of the fun though and we took it in our stride. We managed to find the local supermarket, buy the essentials and draw some money. The heat though makes everything feel twice as hard to do. Aiden was of course asleep on my shoulder before we left the supermarket to head back home, as the sweat was dripping off him. I did have to sneak in a cheeky liquor store visit after the grocer for a bottle of white wine. I won’t mention what it cost but let’s just say that we’ve reached our “$100 a day” budget. I think it’s safe to say that it won’t be a drinking type of year.

The local grocer was exactly how I had imagined it to be with fresh fruit and flowers in abundance. We picked up some beautiful looking kiwis, grapes and the biggest tomatoes I’ve ever seen. I have already sampled the kiwis and they were delicious. It’s amazing that a) they were cheaper than the tomatoes and b) that they are by far cheaper than the kiwis in Cape Town so I can eat plenty of them while we are here. I can’t wait to see what tomorrow holds, as the plan is not to over plan. We want to immerse ourselves rather in the cultures of the cities we visit, by going to museums, botanical gardens and even the library. These things happen to all be free of charge too which doesn’t hurt our budget. We will of course splurge on one or two days by visiting Christ the Redeemer and such. You can’t fully well come to Rio without doing that, and it ticks a bucket list item for me.

Peter, Aiden and I plan to do some vlogging along the way, where we will fill you in on all the information in our blogs as well as some added extras. Please follow us on Instagram @ourmassivefamilyadventure