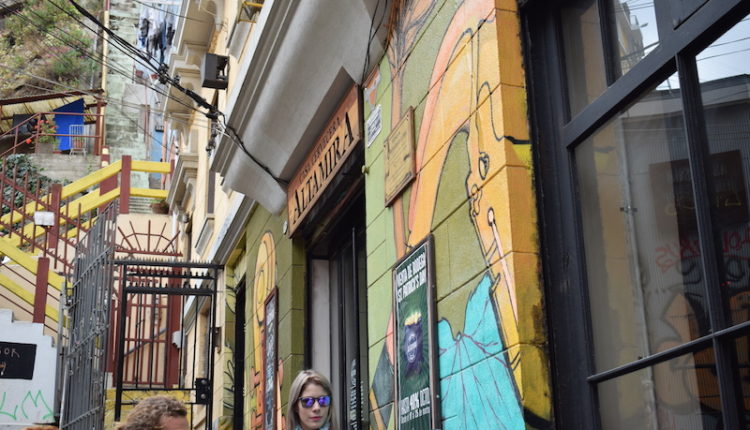 Falling in love with Valparaiso….

When first arriving in Valparaiso I never thought I would feel the way that I do now at the end of our stay here. I have completely fallen in love with this city and our 10 day visit was just not enough. I’m not sure what it is about this place exactly but it just has a magical feel about it. It could be the eclectic, bohemian vibe it has going on or the beautiful old buildings, street art and cobbled streets. The people are also really friendly and most speak English which was lovely as I could finally converse with my Uber driver or grocery teller (I’ve really missed being able to talk to people). I’m sure fellow travellers who have been travelling for an extended period of time, will understand that when you can’t properly understand conversations going on around you, it can feel quiet isolating or even lonely.

Aiden of course fell in love with the beach (he actually swam in the freezing cold water) and I of course fell in love with the local markets. Peter might not have enjoyed the markets or browsing as much as I did but he certainly feels the same way as I do about the city and we both agreed on the fact that we could see ourselves living here one day (who knows what the future holds).

Our Uber driver actually thought we were from the United States and when I told her that actually we were from South Africa she was genuinely surprised as she said not many South Africans visted/ holidayed here in Valparaiso. I could understand why though as it’s not much talked about in terms of holiday destination. Most people would think of just going to Chile’s capital – Santiago, but wow would they be missing out if they did not at least spend 3 days visiting the town of Valparaiso.

We did a number of “Where’s Wally” walking tours here in Valparaiso. The intention is that the tour is free and you leave a tip at the end for the guide i.e. what you thought the tour was worth (Tours4tips). It’s such an amazing concept and well worth trying out. We had so much fun and learnt so much about Valparaiso. Our tour guide was named CJ and he took us on both of our tours. One was a morning tour and the other we did the following day in the afternoon. CJ was a real trooper as Aiden latched on to him almost immediately. CJ was so kind and patient carrying Aiden a lot of the way whilst giving the tour. The tour is mostly walking but also consists of some bus and trolleycar rides. It was an experience we’ll never forget highlighting for us the friendliness and sense of welcoming that the locals have here. I mean Peter, Aiden and I stick out like sore thumbs here in South America with people often gawking at us. We find it absolutely hilarious but CJ and his walking tour team were completely accepting and got the time to get to know us and even asking me to teach him some Afrikaans words. If you’re ever in Valparaiso you must definitely go check those walking tours out.

Besides the walking tours, we managed to frequent the beach which was just a stone’s through away from our air bnb. There’s nothing better than listening to the sound of the ocean before you drift off to sleep at night that’s for sure. Funnily enough, Aiden used to hate the beach back home in Cape Town but he’s done a complete 180 now begging us to “move faster” so we can get there quicker when we do go. Our air bnb kindly left us some beach toys to use so Aiden was in seventh heaven on the beach laughing away as he played. There was a particular boat toy which he was fond of and he played in the waves with it sailing it up and down. Watching him play truly brings joy to my heart. We are so lucky to be on this amazing adventure where we don’t have the stresses around us that plague us back home. What could be better than the sun on your face, your husband next to you and your child playing freely knowing that you don’t have to be anywhere but in that moment….

Strangely enough besides the one or two sunny days that we did get ,the weather here has been quite mild (the sun only comes out at 13:00 which is quite weird). I was expecting high temperatures again but I was told we are getting to the end of the Summer season here and temperatures are dropping. I haven’t woken up in the morning feeling chilly for almost 12 weeks now, so the sensation was not pleasant at all and besides I didn’t have much winter clothing packed, cue shopping trip to the main street to buy two long sleeve T-shirts and a cardigan. I was trying to steal some of Peter’s jumpers #tryingtostayonbudget but he was having none of it. I was quite sad actually as I really fancied the one. So warmer clothing in hand we did a fair bit of walking this week even venturing to the top of the hill we are living on. I carried Aiden for most of the way up (my arm muscles are getting incredibly strong, or so I hope) but Aiden decided to run all the way down and he actually managed to make it without being assisted. He’s getting so fast for a boy who lives on chicken nuggets, apple juice, ham and cheese so I was impressed.

I could really get used to the late morning starts here in Valparaiso and enjoying the longer evenings (people sit on the beach until 19:30). Also I think the food and clothing is very reasonably priced making it more tangible to live here for a longer period of time. I really had the most amazing time and will forever cherish the memories and the friends made here in Valparaiso, Chile.