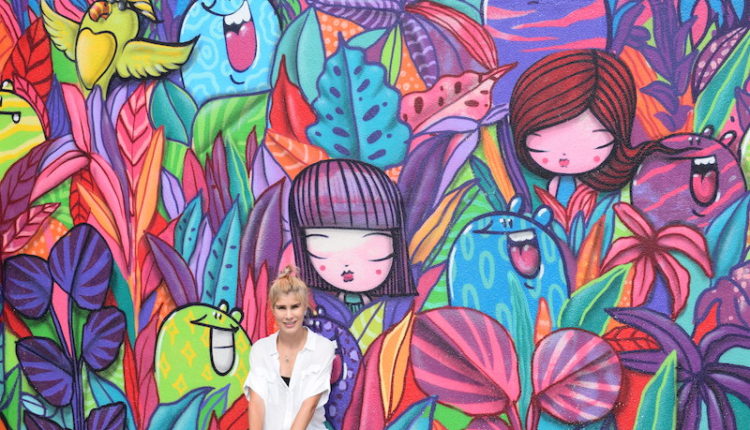 My first taste of Rio

As soon as we disembarked from the plane we saw vibrant colours and artwork on the walls in the airport. I knew then that we were in for a cultural treat. Rio is known for its bright colours/ culture and design and it certainly hasn’t disappointed.

We’ve already experienced the heat, sand and surf of Copacabana/ Ipanema and Leblon Beaches but on our second day when we decided to head down to Copacabana for the first time. We were greeted to mild spits of rain which later became thunderstorms which eventually drenched us. Not such a successful beach run that time, but we at least got to take in the different colours and cultures along the Copacabana Beach Promenade. We even experienced the traditional coconut water (which you literally drink out of the coconut/like in the movies) and a “sorvete” (ice-cream) for Aiden (he’s obsessed with the grape ones currently). He kept asking me if it was ok to make a mess with his ice-cream, which me made laugh/ feel half concerned. Was I that much of a clean monster back home? I kept reassuring him that it was ok to get messy and make a mess which he seemed delighted by. All the beaches here are beautiful but so vastly different from home. It has taken us a while to get used to the many vendors selling their wares on the beach, for example, sarongs/ clothes/ bikinis (literally hundreds of different styles)/ sunglasses/ food and even alcohol. Everything is so readily available and they even take VISA on the beach which is very convenient but also very tempting for a shopaholic such as myself. I’ve had to certainly restrain myself on at least three occasions.

So shortly after our arrival I decided I needed to get my first Brazilian wax (I didn’t have time to get one before our departure from Cape Town). Eeek! Yes, a wax in a foreign country – A big feat – I had to download an app translator as the language here is strongly Portuguese and I didn’t want them doing the wrong thing to my nether regions. Once I’d completed my translation homework i.e. Please can I get a Brazilian wax, and written it down on a piece of paper I was on my way. It was luckily a close walk to the nearest beautician from our air bnb. I was greeted by a very nice looking lady and after retrieving the piece of paper from my wallet and in my best broken Portuguese I said “Ola, Bom dia, Por favor depi lacao sensual”. Let’s just say all went well and I was “beach ready” for the next day…

From bikini waxing to fairs, the Portuguese do them well. The markets here are incredible. Ipanema Beach Hippie Fair which is held every Sunday, is much bigger than I thought. It’s held in a square and they sell everything from jewellery to artwork to leather and then the age-old souvenirs of course. I loved just walking around soaking it all in. Of course, Aiden and Peter weren’t as enthralled by the market as me, but we hit the beach afterwards which made up for it. Of course, in Lauren fashion, after the beach we had to pop back across the road, and walk through the Fair again to make sure I hadn’t missed anything… By that stage more stands had opened and there was more to look at. Many people were bargaining loudly and the Portuguese are quite a loud culture so lots of fun to watch. On another occasion, we had planned to go out one Sunday night to along the Copacabana Promenade to experience some Rio nightlife, but we also stumbled along a night market. It was a festive feast of lights, carnival acts, loud music, vendors, arts and crafts and even churro vendors. We ended up walking around for ages and Aiden was enraptured. I even ended up getting a hair braid and henna tattoo (as all tourists do, don’t they?)

The Botanica Jardim (Botanical Garden of Rio) really blew me away though. If you want to spend hours amongst exotic flowers and plants, a trip to the Botanical Garden is a definite yes. This is a true ecological sanctuary where you can spend the whole day admiring the lush green surroundings  (if it wasn’t for the extreme heat we might of stayed longer). The towering Amazon trees provide protection to a wealth of wildlife including Marmoset monkeys, Toucans. Unfortunately we didn’t see any wildlife but the beautiful Japenese Garden made up for that. It even featured a traditional red bridge with koi fish running in abundance under it. We found out that there are over 8,000 species of plant life, with orchids and bromeliads in abundance. The royal palms and pau-brasil trees have become the Garden’s symbol, while the Garden is a UNESCO biosphere reserve. Of course Aiden found the playground and we had to test out all the play equipment, followed by a grape sorvete. He was in his element and really enjoyed the day. He passed out in the taxi home after about two minutes #winning for us #downtime for the parents which was much needed.

The museum – Museu do Art do Rio was a cultural treat too. It’s in the heart of Rio and it took some planning getting there but we made it. We headed there on a Tuesday as its free (we’ve certainly done our homework on freebies) and even if we had paid it would have been well worth it. The museum was comprised of quite a few floors and you had to walk up each floor on these amazing wooden steps. Aiden thoroughly enjoyed running up and down them and I think it was the most enjoyable part of the trip for him (he’s not much into art yet but who can blame him?) The artwork was amazing though and it was a mixture of historical and modern work.

I feel like we have had a great start to our trip and have felt very at ease here in Rio. The locals have for the most part been accepting of our bad Portuguese and they have obviously taken a liking to Aiden. He seems to be able to win most people over with his charm / good looks (which he clearly gets from me). We look forward to more cultural treats this week…..Until then…