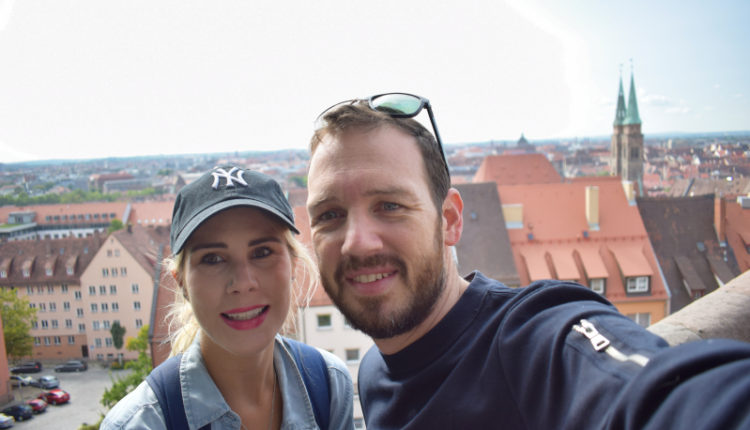 As I start writing this blog, it feels apt to mention that our introduction to Germany was somewhat atypical. When I think of Germany, I think of precision, perfection and of excellence. And for me, these descriptions apply to their train system too.

Our first experience however was none of the above. We arrived at Strasbourg station to find our train to Nuremberg had been cancelled. The cancellation was due to repair work being carried out on a damaged bridge. This resulted in a day of chaos, as all trains were being rerouted, and our simple two-train journey now entailed catching four trains and a bus. Of course, we were not the only ones impacted and so the trains were all full and without having reserved seats on these rerouted trains, we spent the day scavenging for places to sit or just hovering in the restaurant car.

We did however make it safely to Nuremberg, although a little later than planned and very travel weary. On arrival we also found, that as in France, all shops are closed on a Sunday, and so there was nowhere to buy some much needed supplies for dinner. Thankfully however, there was a restaurant about a two-minute walk from our new home, where we enjoyed our first meal in Germany. Apt, considering our atypical German experience, that the restaurant was a Greek one.

So, although our first taste of Germany was definitely more Greek than German, looking back Nuremberg allowed us to experience what life would be like if we were to live in Germany. We lived a very simple and normal life while here, but it was a good life and we had some great times in the city.

Our Airbnb home, was lovely, a very big apartment, with lovely high ceilings, and we all felt very comfortable right from the start. We felt so comfortable in fact that very often we didn’t feel the need to go out exploring, we were happy and content just being at home.

That being said, we did however get out and explore the city. Nuremberg is not a huge city and the location of our home allowed us to walk everywhere we needed to go, albeit some of our walks were rather lengthy. Being a smaller city, there is an exhaustible list of tourist attractions to go and see, and you probably don’t really need much more than two or three days in the city.

This however suited us, at it meant we had lots of time for parks, neighbourhood strolls to nowhere and time for normal life, without having to miss out on seeing the key sights of the city. The summer weather finally seemed to have returned as well, which was a welcome change from the cooler weather we had had in Strasbourg.

Some of the key attractions to see whilst visiting include,

The castle is a group of medieval fortified buildings on a sandstone ridge dominating the historical centre of the city. The castle, together with the city walls, is considered to be one of Europe’s most formidable medieval fortifications. The castle was just a short walk, although somewhat steep uphill walk from our home and was the first place we visited. Being up on a hill, the castle offers some amazing views of the city.

It is one of the most important churches of the city, and also one of the oldest. Almost completely destroyed during World War II like the rest of the city, St. Sebald was reconstructed in 1957.

Walking through the interior of the church there is a photographic story of how the church was destroyed and then rebuilt. This was our first visual encounter of just how much damaged was inflicted on this city during the war.

The Way of Human Rights is a monumental outdoor sculpture, opened on 24 October 1993.

The sculpture consists of a gate, 27 round pillars made of white concrete, two pillars buried in the ground showing only a round plate, and one columnar oak, for a total of 30 pillars. Engraved in each pillar is one article of the Universal Declaration of Human Rights in German and another language.

This sculpture is part of Nuremberg’s efforts to shake off its Nazi-era reputation as the “City of the Party Rallies” and reinvent itself as a “City of Peace and Human Rights”.

The Nuremberg Palace of Justice

The building was the location of the Nuremberg trials that were held from 1945 to 1949 for the main surviving German war criminals of World War II. The Palace of Justice was chosen as the site of the trials because it was almost undamaged, offered sufficient space and included a large prison complex. The choice of the city of Nuremberg was also a symbolic one, as the Nazis had held large Nuremberg Rallies in the city and was a former Nazi stronghold.

This is Germanys largest museum of cultural history and holds of collection of over 1.3 million items relating to German culture and art extending from prehistoric times through to the present day.

We left a visit to the museum to our final day in Nuremberg, but we are extremely glad we visited, it is one of the best museums we have visited and has a huge variety of collections, including a room dedicated to the history of fashion, the perfect exhibit for Lauren.

To this end, Stadtpark is the best place for this. Even though Nuremberg city park is not that big in comparison to some city parks around the world, it is a favourite place with the locals and with us. We spent the better part of a full day here, it’s a lovely place to go with kids, we had a wonderful picnic in the shade of one of the many trees in the park, and spent hours playing on the jungle gyms and swings. There are so many different and exciting play areas for kids. If you were to ask Aiden, I am sure he would say this was one of the highlights of his Nuremberg trip.

This is a great place to visit with kids, but even without kids it is worth visiting and spending some time at, the southern part of the park is beautifully landscaped and very nice for romantic walks.

We were very fortunate to be in town for the Nuremberg Volksfest.

The Volksfest is a massive carnival which happens twice a year in Spring and Autumn. On arrival in Nuremberg we had no idea the Volksfest was happening or what it was. We saw advertisements for the festival and decided to go and see what it was all about.

We are so glad we ventured out to the Volkfestplatz, which is located in the southeast of the city and was part of the former Nazi Party Rally Grounds. Being from South Africa, we have never experienced anything on this scale before, it was an amazing, mind blowing experience for us as adults, I can only imagine what a sensory overload it must have been for Aiden.

Nuremberg was an amazing place, with so much culture and history, it has a dark history with strong ties to the Nazi party, clearly evident when visiting places like the palace of justice, but its history goes far beyond the 1940’s and the Nazi’s. And this is evident almost everywhere you go, from the castle and the city walls to the many churches and museums.

The city has done a lot to shake off its Nazi past, and personally I think it has been very successful. The city was almost completely raised in WWII, but from the ashes the people of Nuremberg have built a modern, beautiful city that remains steeped in history and can truly be considered a city of peace.

But despite this and all the history and amazing things to see and do, for us, Nuremberg will forever be the remembered for the magical afternoon we spent at the Volksfest. The start of our German visit may have been atypical, but the end of our trip and our day spent at the Volkfest was a quintessentially German and one we will remember for a lifetime.

I would honestly recommend a visit to Nuremberg, and cannot encourage you enough to coordinate your travel dates to ensure you get to experience the Volksfest for yourself.

Our Euro adventure begins with a visit with friends in Cognac