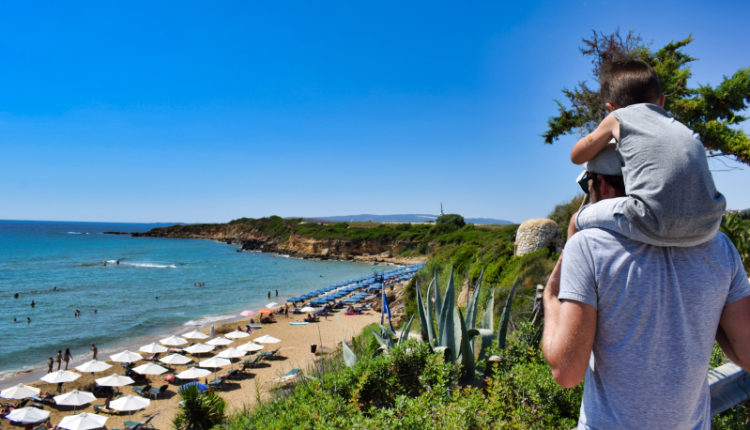 Our Greek odyssey, a mixture of relaxation, adventure and bed rest

Our plan was always to include Greece on our trip. What we didn’t plan for however, was just how difficult it would be to settle on an island to visit.

We spent ages pouring over the internet looking at hundreds of accommodation options on a variety of different islands. Based on our experience, I would strongly recommend deciding on an island to visit before even looking at accommodation options. At least that way you can avoid some of the confusion of selecting your perfect holiday destination.

There are so many choices, with each island offering a slightly different experience. It would probably therefore be advisable to decide what you want from your holiday upfront, and then go about choosing the island that will meet your expectations.

After much research and discussion, we did finally settle on an island. We chose to visit Kefalonia. Our choice came down to a couple of factors, including costs and budget, but primarily we chose Kefalonia for its white sandy beaches.

Our Greek holiday was almost exactly what we expected, we stayed in a lovely family run hotel and spent our days lazing by the hotel and on the lovely beaches nearby. We enjoyed loads of traditional Greek food, both at the hotel and the local taverna’s nearby.

And of course, we had some opportunity to explore the island.

It was almost the perfect Greek getaway, almost, but not quite.

One problem was that there are very few transport options available on the island, so unless you rent a car, you will be restricted to the local area in which you are staying. Renting a car is easy and I highly recommended it when visiting this island.

We didn’t rent a car, and chose to explore the island by means of organised tours, although in hindsight, having freedom to explore under our own steam would have been fun.

Other than the transport problems, I was struck down with a horrible flu and high fever during our stay on the island. Which did restrict us and meant we spent more time close to the hotel than we thought we would have. It is never nice to be ill whist one holiday but I guess when travelling long term, it is inevitable that at some point we will all be struck down with some ailment or other.

If you are looking into visiting Kefalonia I can only but recommend it. It is a wonderful place, with wonderful people and amazing beaches. There is also so much to see and do, for those days when you don’t feel like lounging on the beach.

Our adventures included some of these amazing places;

This monastery is dedicated to the patron saint of Kefalonia: Agios Gerasimos whose remains are kept in the monastery in a silver casket which is periodically opened by the priest of the church to allow pilgrims to apply directly to the Holy prayers and to kiss the remains.

On the morning we were there, the casket was open, Aiden and I waited outside while Lauren went in to pay her respects, she has yet to confirm or deny if she kissed the saints remains.

The Robola Production Cooperative has been operating since 1987, under the slopes of Mount Ainos and next to the monastery of Agios Gerasimos.

Here we learnt about the production of Robola wine. We also had a tasting before moving on. I must say, I was not very familiar with Greek wines before this trip, but was very impressed with the Robola, we even purchased a bottle to enjoy back out our hotel.

The Cave of Drogarati is a must-see attraction, discovered nearly 300 years ago, after a large earthquake, a portion of the cave fell in on itself creating the current day entrance. The depth reaches 95m and the temperature is a constant 18°C all year round.

In order to get into the cave, you have to descend specially designed steps, which because of the humidity are rather slippery and hazardous, so watch your step on the way in. The somewhat precarious journey into the caves is however well worth it. They are quite spectacular.

The lake is 20m below the surface, is about 160m long and the depth of the water ranges from 10-40 m. If you visit Kefalonia and only do one thing while on the island, this is it. I don’t think you can come to Kefalonia and not experience the beauty and wonder of the Melissani lake.

The natural entrance of the cave is vertical and was created by the collapse of a section of roof. Nowadays however there is an artificial entrance with stairs, taking visitors down to the uncovered part of the lake, where light falls on the water and creates beautiful turquoise shades. It is here where you will board a rowing boat and be taken on a tour of the cave.

We ended our first day of exploration here, it is a traditional fishing village centred on a small harbour.

Many of the old buildings in Agia Efimia were destroyed in the 1953 earthquake, although a few original buildings survive. The main activity of the village is now tourism with many taverns bars and shops. This is also the departure point for many island cruises and exertions, and the point from where we started our Ithaca island cruise.

In addition to exploring the island overland, we also headed off on a boat for a day to explore the island and surrounds by sea, we started in Agia Efamia and headed to the bay of Polis on the island of Ithaca. Stopping at a quaint little fishing village.

We then headed back to Kefalonia and to the town of Fiskardo for lunch. It is a beautiful village, and was the one village unharmed by the earthquake of 1953, so probably the most authentic village from an architectural perspective. Although it has now become a very popular location for the rich and famous and those living a jet set lifestyle, and the prices of things here reflect that. Very nice for a visit and a browse, but you are probably better off keeping your wallet safely in your pocket.

After our Fiskardo lunch stop we started our slow journey back to Agia Efimia, but before ending the cruise, the boat dropped anchor just off the shore of a small little bay which gave us the opportunity to swim in the warm waters and cool off from the heat of the day.

Although our Greek odyssey was mostly spent in and around our hotel, it ended up being the perfect mix of adventure, sightseeing and just pure rest and relaxation. When visiting new places, the temptation is always to get out and explore everything on offer, and not spend enough time just relaxing.

When coming to Greece, I think the best thing to do is adapt to the Greek way of life, slow things down, relax and enjoy life. So, by not having many transport options and thus being somewhat confined we were forced to adapt to the local pace of life. At first it was somewhat frustrating, but by the end of our stay we had completely integrated into the lifestyle and didn’t want to leave.