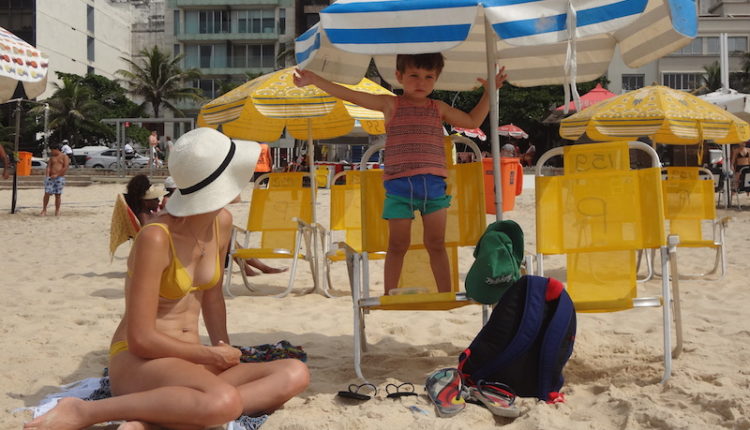 Last week felt jammed pack with loads of typical tourist activities, whereas this week has been a far slower and more relaxed week. This past week we have felt far more like locals in “our” city rather than just tourists visiting.

We have spent many hours walking the streets of our local neighbourhood, Botafogo. Just soaking up the sights, sounds and smells. And sometimes even tastes. It has interested me on this trip how acute Aiden’s sense of smell is. It has become a regular occurrence to hear his little voice say “what’s that smell” whilst walking around town. Now the smells are nothing untoward, they are just the smells of the local flora, or that damp smell one experiences in a typically humid climate. But they are very different to anything he has experienced before. Of all the senses, I would least have expected the sense of smell to be the one most heightened in a young child. I wonder if anyone else has had similar experiences travelling with young children?

Lauren will share more of our shopping and cultural experiences with you on her, more lifestyle focussed blog. You can read all about it here

We also spent some more time this week soaking up the sun on Rio’s beaches. This week however we spent our time on Leblon beach. It is advertised as more child oriented and friendly. I am not sure that it has anything different on offer than either Copacabana of Ipanema, but for some reason we did have a far more enjoyable time here. It has become our preferred beach in the city. And I am very pleased to report, that finally, after much coaxing, Aiden has ventured into the water, played in the waves, and much to his surprise, he really enjoyed himself.

You cannot however come to Rio de Janeiro and not take a trip up the Corcavado mountain to see the famed Christ the Redeemer statue up close. I was going to say up close and personal, but since being named as one of the seven wonders of the world, there was nothing personal about this experience. One unfortunately must experience this wonder of the world with the throngs of other tourists in the city. There are multiple options to get to the top, we however chose to take the tram up the mountain. Mainly because Aiden loves trains, and I felt this would be the best experience for him. You can book your tickets on line in advance, I would suggest you do so and try and get one of the first rides up to ensure you beat the crowds. We went up around 11am, and caught the heat of the midday sun and what felt like the peak of the crowds.

Our trip up to the Christ the Redeemer statue is a trip I will never forget, but probably for all the wrong reasons. On route to the Tram station, Aiden suddenly announced that he did not feel well and that is tummy was sore. We were not overly concerned as he has always been a good traveller and never experienced motion sickness. In what felt like the blink of an eye, he lay his head on Laurens lap and proceeded to throw up all the guava juice he had consumed that morning. Thankfully, the Uber taxi driver was very understanding, he had leather seats and we had loads of wet wipes, so the damage to the car was negligible. Laurens outfit however, was not so lucky. She attempted in vain to clean up first with wipes and then at the basin in the ladies restroom, neither with great success, before finally resorting to purchasing a new outfit at the curio shop. I must commend her for being such a trooper and soldiering on, I am not sure if I would have been able to if I were in her shoes. And as for Aiden, well he seemed no worse for wear after the episode.

After recovering from the events of the Uber taxi ride, we caught our tram up the mountain. Spent some time at the top of the mountain, admiring the views, taking some snap shots of the statue, browsing the curio shops and grabbing a bite to eat, all the while fighting through hordes of other tourists all trying to do exactly the same thing.

If I am to be perfectly honest, the best part about the day was the Tram ride. And if you are ever in Rio de Janeiro and are heading up the Corcovado, I highly recommend the Tram. The sights you experience going up the Tram through the forest is quite something to behold. The rest of the experience was a little underwhelming.

Don’t get me wrong, the statue itself is something to behold. It is truly wondrous, and absolutely deserves to be considered one of the seven wonders of the world. The experience of visiting this monument however, not so wondrous. I guess that is the downside to visiting famous landmarks, everyone else is visiting them too.

We had the privilege of living under the statues shadow for two weeks, and waking up to the glory that it is every morning. And for us, that experience was far more wondrous than being up close with the statue. Just walking the streets of Botafogo every day, and seeing the statue standing proud above the city was an amazing site, and one we will treasure far more than the actual trip up to the top.

As our time in Rio de Janeiro closes, I think that sentiment rings true for our whole time here. We have visited some amazing sites and attractions that the city has to offer. And they have all been eye opening and fantastic. But the truly wondrous part of our stay has just been the “living” in this beautiful city. Being part of the culture and the unique pulse the city has to offer. From a simple walk down the street to the local bakery, to a walk around the lake, or a night stroll down Copacabana’s beach front and a simple meal at one of its many beach side restaurants. And after all, that is what our massive family adventure is all about.