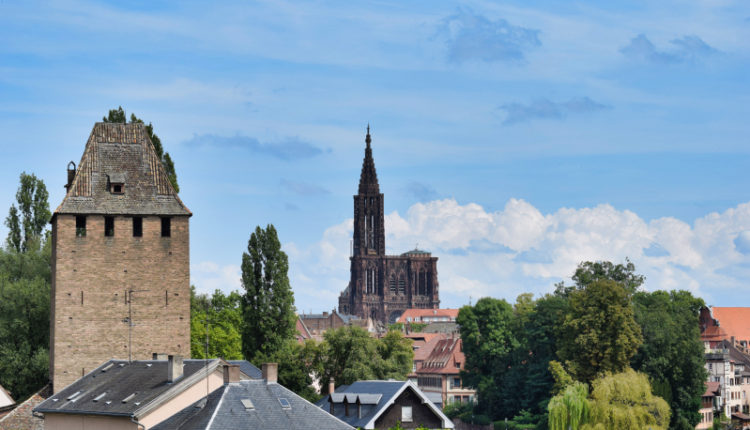 As mentioned in my last post, the next stop on our Euro trip was Strasbourg. I don’t know what is was about this town. But there is some magic here that just captivated me. I felt at home almost immediately. And to be honest, when it came time to move on, I was reluctant and just didn’t feel ready to leave.

You may be asking, what this magic is, and you may be expecting me to give you an answer. But to be honest, I can’t. As I am not sure myself. I wish I knew, as in that way I could make sure we replicated the magic in all of our future destinations and more importantly in our forever home one day.

Perhaps it was the fact that it was the first time in a while that we were on our own again as a family of three. Perhaps it was our location we were in, right in the heart of the old town. Or perhaps it was the geographical location or the city, being right on the border of France and Germany, and thus providing the best of what both cultures have to offer. As the saying goes.

In France you eat well, in Germany you eat a lot and in Strasbourg you eat both well and a lot.

The  cathedral is considered to be among the finest examples of Gothic architecture. The cathedral was constructed using Sandstone from the Vosges, which gives the cathedral its characteristic pink hue. Regardless of whether architecture is your thing or not, you will be amazed by share scale of this beautiful building. Interestingly, at a height of 142 meters, this was the tallest building in the world for 227 years, until it was surpassed in 1874 by St. Nikolai’s church in Hamburg.

The Barrage Vauban was built in the 1600s and this fortified bridge and weir on the River Ill was a cornerstone of the city’s defences. The idea was that in times of siege it would raise the level of the Ill and flood the lands to the south, and also drop barriers to prevent invaders from passing through. There’s an internal corridor running the length of the structure and you are able to go up to the roof, which offers amazing views on the Ponts Couverts and of the Cathedral.

The Ponts Couverts, or covered bridges in English signal your entry into the area of Petite France. They are a set of three fortified bridges that you’ll know for their four tall square towers. The towers were built in the 1300s and were part of the city’s original line of ramparts, although become obsolete after the completion of the Barrage Vauban. The name “covered bridges” is a bit of a misnomer as although they were once protected by long roofs, the roofs have been gone for almost 300 years but they name has prevailed.

This is considered to be the most photogenic area in the city. Millers, fishermen and tanners plied their trades in this district of waterways, weirs and locks. And with the cobblestone streets crowded by black and white half-timbered houses, it really is a very beautiful setting. We, were most fortunate to be living in this district, which meant we got to wake up and enjoy this beauty on a daily basis.

A beautiful park, just across the Ill from the European Parliament and Court of Human Rights. This park took shape during the French revolution when 140 orange trees were confiscated from Château de Bouxwiller were granted to the city. Just three of these trees now remain, and you can still see them on certain days in the park’s greenhouses. There is of course a lot more to this fantastic park than three orange trees. Here you will find a large boating lake, lots of long, leafy avenues, lawns, and even a mini-zoo and farm for kids.

Museum of Modern and Contemporary Art

The striking glass-and-steel cube, that is this art museum, houses an outstanding fine-art, graphic-art and photography collection. The museum many Besides modern and contemporary works by the likes of Kandinsky, Picasso, Magritte, Monet and Rodin but you’ll also encounter pieces by Strasbourg-born artists and a visit here will be a morning or afternoon well spent.

These are the attractions and sights that kept us busy during our time in Strasbourg. It’s a truly beautiful city and we feel privileged to have called it home for a while.

Yes, the city does indeed have a special kind of magic, but on reflection, I think that magic is replicable. Perhaps not the history, the architecture or the culture. But most certainly the enjoyment that comes with being able to spend your days with those you treasure most.

Our Euro adventure begins with a visit with friends in Cognac